Insect allergy occurs as a normal response when some local inflammation at the site of insect bite or the sting, that may have some itching involved.However many people are allergic to insects if they have weak immune system which is sensitized to particular insect venom.

Allergic reactions to insect stings can range from mild localized symptoms to severe or generalized, systematic reactions such as immediate hives and rashes over all the body.

It totally depends on the individual sensitivity for allergic reaction and it may also lead to severe condition with repeat encounters.

Allergic reactions of insects are divided in to 2 categories.

Symptoms of large local reactions are swelling, redness, and itching which may or may not confines to area of the sting. This can generally occurs 48 hours later and long last up to 5 to 10 days.

These can also have large local reactions and also spread beyond the side and cause hives everywhere on the body. It also makes respiratory difficulty, throat swelling and leads to anaphylaxis.

Anaphylaxis is considered as a life threatening allergic reaction which may include symptoms like tightness in chest, difficulty in breathing, dizziness, sudden drop in the blood pressure and cardiac arrest.

You need to seek medical attention immediately if you find any of the symptoms on your body.

Insect allergy is caused due to the venom of the insect when injected into the skin. Insect bites is generally caused by the reaction to anti-coagulant in insects’ saliva.Some of the insects which cause allergic reactions are as follows:

One of the most common insects bite is of mosquitoes. Mosquitoes are not allergic to many people and they have small local inflammation with itching, but some people can be allergic and will have large local reactions.

Bees can cause life threatening allergic reactions, some people may feel allergic with large local reactions but may not be at risk of systemic reactions.

Its better be careful and have epinephrine auto injector available for potential life threatening reactions is extremely important. 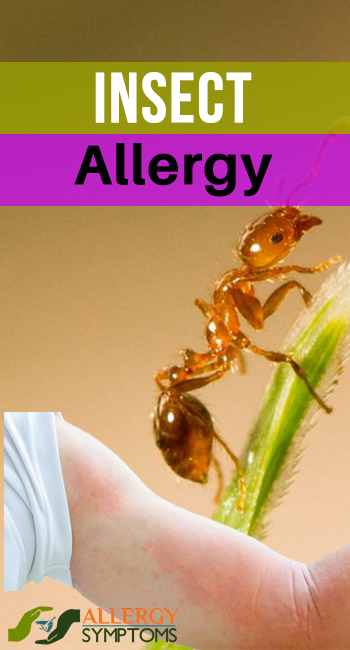 Allergic reaction of ants may range from local allergic reactions to systemic and life threatening reactions on your body. The most dangerous one that cause infections are fire ants.Fire ant venom immunotherapy is available for those who are at risk of systemic reactions.

If you are concerned that you have an insect allergy then you may immediately concsult your allergist.

Allergist should take the complete medical history and perform one or more test to diagnose allergy to insect venom.

In blood test, the blood sample is taken and sent to laboratory to test for the presence of immunoglobin E antibodies to insect venom.

In skin prick test, insect venom is placed on the back side of the fore arm, and allows the liquid to settle down by pricking with a small sterile probe. If redness occurs within 15-20 minutes it indicates the allergy.

Once the allergy has been identified, then the potential risks and symptoms can be managed and treated in a number of ways which depends on particular allergen and symptoms.

It reduces the likelihood of anaphylaxis from future stings and may result in permanent cure.Over 90% of patients who complete venom immunotherapy will not suffer from systemic reaction ever.

Avoid exposed food in picnics and try to reduce amount of exposed skin when outdoors.If you had an allergic reaction before then it’s better to consult your allergist before taking precautions.

The first step is, if the symptoms have severe reactions then emergency treatment should be done for the patient.

The second step is preventive treatment of the underlying allergy with whole body extract immunotherapy.